Hungry in London with a stomach dreaming of home? From the smoky to the sensory, the city offers distinct African culinary encounters.

The unfussy algorithm of a well-known review website has decided there are 105 ‘African’ restaurants in London. Search for ‘European’ restaurants, and you’ll discover 2,654 – now your gut might be telling you something is amiss in the capital’s gigantic foodscape.

‘European food’ seems rather a strange and empty phrase (bouillabaisse and chips, anyone?), but an equivalent suspicion of categorization seems not to apply to dishes from Africa, a continent boasting 54 countries to Europe’s 50. London may indeed be aggressively cosmopolitan, but it might be a while before this ravenous city can really consider itself fully ‘woke’.

Thankfully, word-of-mouth is still a solidly reliable guide to the thousands of eateries in the city, so let this small slice of recommended eats from the African continent – Ghanaian, Senegalese and South African – serve as a modest appetizer, should you find yourself hungry in London with a stomach dreaming of home.

“For me, it should be seamless – the tradition is in the flavor profile of the dish,” says Zoe Adjonyoh, author of Zoe’s Ghana Kitchen, of the challenge of reinventing Ghanaian flavors for a new audience.

“The reinterpreting is in the creativity of how to rebuild the dish through different cooking methods, or blending its inherent ingredients in new ways.” Try her ‘Suya Cauliflower Florets’, featuring the smoky notes of the Nigerian and Ghanaian suya spice blend, by way of tasty example.

READ MORE: The Foodies With A Drive For Business

Through her increasingly popular pop-ups and residencies, Adjonyoh tries to avoid “preaching or teaching” what Ghanaian food should or shouldn’t be.

“I’m highlighting what’s possible, and giving people the motivation to do more with these amazing flavors and ingredients to maximize their taste and longevity,” she says. The cookbook features “traditional Ghanaian recipes remixed for the modern kitchen”. 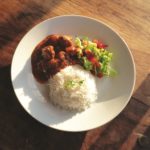 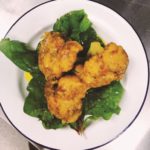 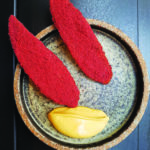 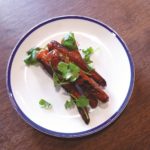 “I’m very keen to champion and promote the next generation of female chefs cooking cuisines from across Africa,” she says. “I see it as part of my challenge and responsibility to keep encouraging them to fall in love with their heritage again through food, and tell their own cultural stories – to be the masters and makers of this food revolution.”

A short bus ride through East London brings us to Little Baobab, a monthly food and music pop-up above a vibrant corner grocery in Hackney. It’s a bright late afternoon, and Senegalese chef Khadim Mbamba is making his ‘Lamb Mafe’ – lamb in a tomato and peanut sauce (a traditional base sauce in Senegal), with rice and salad. It is creamy and tangy-sweet; hearty, but fresh on the palate. He makes me a gift of a home-made chilli paste that celebrates the spice’s medicinal punch but marries perfectly with the roasted umami of the nut gravy.

The events are themselves a marriage of music and food; guests share starters, and then choose from ‘Thiebou Dienne’ (fish casserole), ‘Chicken Yassa’ (chicken with onions and olives), ‘Lamb Mafe’, or ‘Vegetarian Thiou’ (tomato-based vegetable stew). Mbamba’s band – he plays bass – rounds out the sensory smorgasbord while the guests tuck in. It’s an experience close to Mbamba’s heart, full of the joy of community so integral to the Senegalese culinary encounter.

“There is a lot of soul in our food,” he says. “The love you have, making the dish – when people eat that dish, they will feel that love.” Little Baobab began life as a restaurant, with live music every night, but Mbamba and his team are now focussed on pop-ups and catering (especially for weddings).

Westward now towards the financial center, and Etienne Pansegrauw’s Hammer & Tongs braai restaurant in Farringdon. Braai dishes seem perfectly suited to British culture: the locals crave an evolved barbecue civilization of their own, but wage constant war with a climate that seems hell-bent on wrecking any carefully-planned Sunday afternoon cook-out. What better, then, than letting a South African do it all for you?

This elevates the food to much more than barbecue (indeed, South Africans might argue that braai and barbecue are not the same thing at all; that the braai is closer to something like a cultural state of mind). ‘Mutton Chops in Cape Malay Curry’ are tender and sweetly charred; ‘Prawns with Lime Salt’ are juicy and moreish; and ‘Pork Belly with Apple Cider Compote’ gains most from the sickle bush smoke, the layers of pork fat richly infused with the fragrant nuttiness of the wood. The surprise star of the menu, though, is the ‘Honey Fried Carrots with Chilli’ – the plump, crunchy carrots are cooked in honey before being finished on the grill, giving them a caramelized meatiness equal in textural complexity to anything fish or flesh. These are the big, bold flavors of the camp fire, but prepared with panache and an attention to the subtle combinations of flavor and aroma that are the hallmark of great grill cooking.

“If you go back five years, even, if you had opened up a wood fire place, I don’t think that many people would have gone,” says Pansegrauw. “So the timing has been important. I wanted to see if British people would be receptive to this kind of food; that’s why I opened up in an area near the city, rather than South West London for example, which has a large South African community. For every group of 20 Brits that come, there’s usually one South African that drags them here! But then they all come back.”

Our final destination is two miles west, but a galaxy away. Ikoyi is the first ‘African’ restaurant in London to have earned a coveted Michelin star, but the continental label seems even more incongruous here – the irony is that the Ikoyi concept plays with the African association as readily as it flirts with the aesthetics of costume design, science fiction and pop art. This thrilling challenge to expectations is almost an affront – one isn’t completely sure if the menu, and the intensity of its creators, Jeremy Chan and Iré Hassan-Odukale, isn’t just some bizarre but delicious practical joke (chef Chan likens his food in the press pack to the paintings of Mark Rothko, a correlation that some will think pretentious – I found it endearingly ballsy and appropriate).

The ‘Plantain, Raspberry & Smoked Scotch Bonnet’ starter is like something from an Eiko Ishioka fantasy costume sketch: there is a magenta slash of plantain, encrusted with a tart-sour raspberry salt, and a saffron-yellow quenelle of citrusy chilli mayonnaise. The plantain is dense and sugary, the raspberry salt reminiscent of a child’s fizzing candy powder, but with a bass note from the emulsion of Scotch Bonnet warmth. It’s odd, exhilarating and a little bit Star Trek – you might be served this if you were an alien ambassador at a private function on the USS Enterprise.

“The dishes have to lure you in,” says Chan. “You have to look at the dish and think – I want to destroy that! So, for example, a pork chop that looks more like a pig than the animal did – a cartoon version of itself. It’s about aesthetics and deliciousness, but unified. This dish is your kill, your prize!”

Childhood friends Chan and Hassan-Odukale were inspired to open the restaurant by a visit to Lagos (Chan is from the north-west of England, Hassan-Odukale is Nigerian-born), but Chan insists that these are “purposely not Nigerian dishes. They have to be completely innovative. That’s the rule”.

The ‘Smoked Jollof Rice’ is a sensuous love song to the crab – the perfect al dente rice has been cooked in a crab broth, and is finished with an unctuous crab cream; the entire crustacean is used in the preparation. It’s sophisticated comfort food, demonstrating Chan’s instinctive understanding that juxtapositions tradition and experimentation at the core of everything good emerging from 21st century multiculturalism.

“The dishes have to be driven by a creative interpretation of the ingredients,” says Chan, in a suitably enigmatic coda to a week of great eating from Africa. “It’s about a primal connection with the guest. Everything is stripped of any preconceptions.”

Get the best of Forbes Africa sent straight to your inbox with breaking business news, insights and updates from experts across the continent.
Get this delivered to your inbox, and more info about about our products and services. By signing up for newsletters, you are agreeing to our Terms of Use and Privacy Policy.
Related Topics: #Africa, #Cuisine, #Culinary, #Entrepreneurs, #Featured, #Flavours, #Food, #London.