These are some of South Africa’s most memorable sporting moments. They happen at world cups, at Olympic Games and when a team reaches the top of the world rankings. And South Africa’s national women’s hoc-key side want one of their own.

They compete in the Africa Nations Cup in Nairobi this month, a competition they have won for the past five years. This time, however, victory will be only the beginning of a far more important mission. The top two teams in the tournament will progress to next year’s World Cup in Holland – and it’s there that the South Africans want to make their mark. 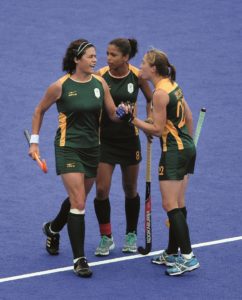 Previously, the team’s success in Africa has not translated into similar achievements on the global stage. South Africa’s best finish in a World Cup is seventh place, and that was 15 years ago. But the steady progress they have made recently holds the promise of a stronger showing this year.

“We’ve been at this process for three years. And now we’re looking for the results to show it,” says Sanani Mangisa, the team’s first choice goalkeeper.

Since 2010, the team have been under the tutorship of Giles Bonnet, a former player for the national men’s side and, with almost three decades’ experience, a renowned coach. When he took over, Bonnet vowed to turn South Africa into a top-six country, a challenge he acknowledged; the team were ranked 12th in the world at the time.

Mangisa describes Bonnet as the best coach she has worked with, because he has “brought a new level of skills to the unit, to make sure we are technically better”.

Bonnet’s secret weapons are camps in China, where he has established close relationships with the hockey elite. He has a deal to use facilities in the Lüshunkou District in the south, where a world class facility has recently been built at a cost of $19.3 million.

“It’s a place where we can really be tested and all areas of weakness are highlighted,” he explains.

After a training camp in June, the team played in a world hockey league tournament in London, which did not end well. South Africa finished seventh out of eight teams.

“We need to close the gap between ourselves and European teams,” Mangisa says.

Bonnet agrees, and points out that hockey is “big business” in Europe. “Each team has many specialist coaches and support staff to assist in creating the perfect environment.”

The geography allows for inter-national competition to take place frequently. Some South African players have tried to ply their trade overseas to gain experience. Pietie Coetzee, perhaps the country’s best-known hockey player, spent some time in the Netherlands in 2007.

But Mangisa says getting a contract in Europe is not easy, and language barriers make it a lonely experience. There is an upside, however: “The big advantage is the salaries. You can live off being a player there.” The same cannot be said for South Africa, where many members of the national team try to hold down jobs while they are in training.

“I think that’s why we see many players coming through while they’re still at university. I did a three-year degree over five years so I could concentrate on my hockey as well,” Mangisa explains.

She was still a student when she was chosen for the Olympic team in 2008. South Africa finished the tournament in 11th place. Four years later, she was part of the squad that went to London. That year South Africa went one better and finished in 10th spot.

But Mangisa would like to see them get within reach of a medal in Rio. She believes the maturity of the squad could help them punch above their weight.

“We’ve taken juniors with us on tours, even if they are just part of the squad and don’t play, so they can get a feel for the unit and how we work. The big feeder system is from the universities and we’ve seen now, the under-21 team has done very well,” she points out.

South Africa’s women’s under-21 side finished eighth in the junior World Cup. That bodes well for a strong Nations Cup, World Cup and then Olympics. The country’s women’s sides have consistently outperformed their male counterparts at the Olympics, even if it is by finishing one place higher, as they did in London last year.

Mangisa admits the women’s results do not have as much to do with girl power as they do with a packed schedule.

“It’s about the amount of international hoc-key we play compared to the men’s team. We go to a lot more tournaments in a year because we have the money to do that, through our sponsor.”

Where other corporates may view women’s sport as a commodity best kept at arm’s length, Investec saw an opportunity.

“It is a commercially uncluttered market. The quality of sport is high and sportswomen have enabled us to appeal to a wider audience and engage in benefits not typically offered by men’s sporting codes,” explains Investec’s Janet Larson.

The sponsorship agreement does not set specific performance targets, however, Investec says it is satisfied that the team have “met their expectations over the past three years”. Their contract comes up for renewal at the end of the year and Larsen has confirmed that Investec is “in discussions regarding future opportunities”.