It’s a familiar scene on a hot day in Accra, the capital of Ghana. The alleys are packed with women, carrying children on their backs, selling vegetables and fake Louis Vuitton bags while men sell anything they can get their hands on. Here, you could be sold a drug that could kill you.

The danger is counterfeit drugs that masquerade as healers but threaten to do the opposite.

Victoria Amponsah claims fake drugs almost robbed her of her unborn child like a thief in the night. The day she was diagnosed with malaria she also learned she was two months pregnant. She went to the nearest pharmacy, in Accra, and bought prescribed anti-malarial drugs she thought would save her and her child.

“That evening, I took the medicine. After about two to three hours, I started shaking and vomiting. I felt weak. I called a cotenant and showed her the drug and she said ‘I know this drug, its ok’. But when she [took out the pills from the box] she said ‘this is not the drug that is supposed to be in this box,’” Amponsah told the NGO, United States Pharmacopeia (USP). 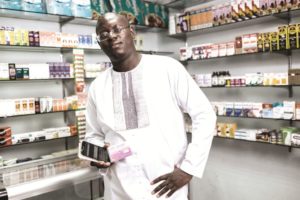 Bright B. Simons is the brain behind mPedigree, a technology that’s used to counter counterfeiting of pharmaceutical products, wax prints and other products that are prone to piracy. Accra, Ghana.

She was rushed to the hospital where a doctor confirmed the drug she took was fake. She managed to complete her pregnancy, but this was not the end of her struggle.

Near the end of her pregnancy, she almost died from a fake version of oxytocin, disguised in convincing packaging. Within 30 minutes of administration, Amponsah was sweating, shaking, vomiting and bleeding.

“I was bleeding so bad. [The doctors] were scared and didn’t want me to move,” she says.

She nearly lost her baby and was hospitalized for two days. For months later, she had to return to the hospital often, for checks.

“Sometimes I hear stories of a person who was fine, gave birth and the next minute the person has died and you find that they gave the person an injection and they died from it. I didn’t know it was that bad,” says Amponsah.

It is the poor, like Amponsah, that suffer. According to the Dutch Malaria Foundation, malaria is responsible for the death of one child dies every 45 seconds, but a third of malaria drugs sold in Africa are fake.

“My son was my biggest present; the center of my life. He is all I have… I am hoping that globally people understand that our lives are more important than the little money they will make out of bringing a fake drug out. [I hope] people will understand that it’s not all about money. It’s about life… the smallest thing, like just a tiny drug which is bad can cause so much damage in one’s life,” she says.

Amponsah and her son Denzel are among the few lucky ones. Over 30% of antimalarials in Africa contribute to nearly 450,000 preventable deaths each year, according to a report in the medical journal The Lancet. Fake tuberculosis and malaria drugs kill an estimated 700,000 people a year, according to the International Policy Network.

The manufacturers of this fake medicine make it look like the real thing. Mario Ottiglio, the Director of Public Affairs, Communications and Global Health Policy of the International Federation of Pharmaceutical Manufacturers and Associations (IFPMA), says fake medicine thrives in countries with weak regulation.

“In areas of infectious disease, like malaria and tuberculosis, fake products with incorrect dosage of ingredients can result in antimicrobial resistance to genuine treatments. At a global level, analysis of reports over a five-year period, from 2005 to 2010, indicates that incidents of fake medicine increased by 122 percent, while diversion and theft increased by 66 percent,” says Ottiglio.

In 2009, 84 Nigerian children were killed by toxic chemicals that were laced with teething medications for babies. In 2012, Angolan custom agents busted counterfeiters importing what turned out to be one of the largest fake medicine imports in history, when containers shipped from China to Luanda, the capital of Angola, were filled with over 1.4 million packets of a fake version of the antimalarial drug, Coartem.

“In 2013, the World Health Organization (WHO) launched a global surveillance and monitoring system… Thus far, 48 percent of cases reported [to the system] have been in the African Region,” says Ottiglio.

A study published in the International Journal of Tuberculosis and Lung Disease found one in every six pills in Africa to be fake. Furthermore, a survey conducted by the National Institute of Health, which examined over 2,600 malaria drug samples across 21 sub-Saharan African countries, found 20% of these drugs were fake and a third were of poor quality.

Ottiglio says the first line of defence is to always buy medicine from licensed and certified sellers. People can check the packaging of the product for spelling mistakes or grammatical errors. Check for expiry dates and that the details on the outer package match up with the inner packaging. Those who are familiar with the medicine can check that the pill looks correct, is not discolored, degraded or doesn’t have an unusual smell.

Even with checks, there is still a problem. Some fake products are almost visually identical to the genuine ones. Often it’s difficult to tell the fake from the real thing.

Patrick Lukulay, Vice President of Global Health Impact Programs at United States Pharmacopeia, says during the outbreak of Ebola in Liberia, there were fake drugs on the market purporting to cure Ebola and people were attracted to them.

“The drugs most counterfeited though are lifestyle drugs such as Viagra and Cialis… Antibiotics and antimalarials are heavily counterfeited also because of demand for these drugs and the tendency for people to self-medicate. ARVs (antiretrovirals) are also counterfeited because of demand and the fact that people might seek to buy them in private settings for confidentiality purposes instead of getting them free from public facilities,” says Lukulay.

These drugs, according to Lukulay, are made in countries that have developed capacity for pharmaceutical manufacturing and packaging, such as India, China, Vietnam and Malaysia.

He says the ingredients used for fake drugs are usually cheaper versions of legitimate ingredients. An example is diethylene glycol, which is toxic but 10 times cheaper than the legitimate pharmaceutical grade ingredient, glycerine.

“They may also include impure cheap raw materials, such as over-sulphated chondroitin sulphate, the one found in blood thinner, heparin, a few years ago that killed people in the US,” says Lukulay. 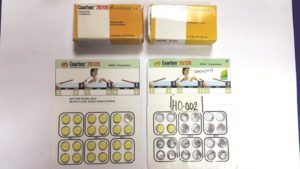 Unfortunately, the problem grows at an alarming rate. Lukulay estimates the counterfeit drug market is worth over $75 billion per year.

Like many problems in Africa, it is seen as an opportunity by private money.

In Ghana, entrepreneur, Bright Simons, says he has developed a program that is helping to curb the counterfeit drugs.

In 2007, he launched mPedigree, a company that has created software manufacturers can use to label their product packaging with a random code hidden beneath a scratch-off covering. If a consumer wants to know if their product is fake or not, they can just scratch off the covering and SMS the code to a toll-free number. They will then be notified whether the product is authentic.

Simons claims his services are used by around 100 million people per year in 12 countries, from India to Uganda.

“Our biggest frontier now is predictive analytics, in particular the use of our EarlySensor technology to predict hotspots and flashpoints of emerging counterfeit activity by looking at large data sets across time and space. If we can predict retail points that are likely to be targeted by counterfeiters by disrupting upstream distribution networks, we can actually stop counterfeiting from even getting to the level of the consumer,” he says.

This will help prevent the suffering that Amponsah experienced. She at least lived to tell her story; many more were not so lucky.