It was the day after Easter.

In the afternoon on what was a public holiday in South Africa, news started trickling in of Winnie Nomzamo Madikizela-Mandela’s death, of illness at the Netcare Milpark Hospital in Johannesburg. She was 81.

South Africa would mourn her passing for the next couple of weeks. As would the world.

Mama Winnie was gone, marking the end of an era, yet in death, rekindling memories of a painful apartheid past, against which she fought valiantly, controversially; the fearless, feisty fighter who famously clenched her fist to rallying cries of ‘amandla’ (Zulu word for ‘power’), had clenched her fists forever.

A hero had departed.

Anti-apartheid activist, politician, struggle stalwart and ex-wife of South Africa’s former President Nelson Mandela, Madikizela-Mandela was known as the Mother of the Nation.

Minutes after the announcement of her demise, grieving mobs poured into her red-brick home in Orlando West, Soweto, thumping chests and crying loudly.

The national mourning had begun, and on the cards for the next 10 days, a slew of memorials celebrating the life and legacy of Winnie Mandela.

The Friday that week, in Bassline, a concert venue in the cultural precinct of Newtown in downtown Johannesburg, the house was filled to capacity for “an all black night” – women in black donning colorful doeks (headwraps), singing, chanting and raising their fists in her memory.

“The revolutionary, sacrificial soul of our time. Blessed are we to have walked the earth in her time as our mother. So when I say ‘I am beautiful’, I know mama was beautiful and still is. When I say ‘I am fearless, I am courageous, I am wise, I am smart, I am powerful’, I am Winnie Mandela,” said Unathi Nkayi, the emcee of what was a memorable Mandela night.

The events unfurled in quick succession.

April 7 saw the launch of Madikizela-Mandela murals as walls of remembrance in various parts of Soweto for which the ruling African National Congress (ANC) used local artists, who started as early as 7AM, spending the day deploying their talent in Mama Winnie’s memory.

“It’s like the highest honor to be able to do something like this,” said Mpho Madi, a graffiti artist from Meadowlands. “Usually, I’m doing things for white people in the suburbs. This one can go in the history books. I feel great.”

Day six after Madikizela-Mandela’s death, hundreds gathered for a tribute ceremony to honor her at Constitutional Hill, where she was prisoner number 1323/69 when jailed by the apartheid government in the last century.

“It’s really hard to stand here, we are sore. ‘Big Mama’ as we called her, took us by surprise,” said Ndileka Mandela, Madikizela-Mandela’s eldest granddaughter before breaking down on stage, and was thereafter warmly comforted by Graça Machel, former first lady and wife of the late South African president Mandela.

“Winnie was my big sister, I take long to process pain, I prefer to be quiet to feel and understand it. It is too early to process the pain we are going through,” said Machel.

After her emotional speech, she walked offstage and kissed a teary-eyed George Bizos in the front row, the human rights lawyer who campaigned against apartheid, most notably during the Rivonia Trial.

The April 11 memorial service in Orlando Stadium, just a few kilometers from Mama Winnie’s home, saw a stadium half-full, but the cheering was as loud as soccer fans watching a Soweto match. It was exhilarating despite security denying photojournalists access to the field.

“Today I’ll be speaking about my great grand granny. She was the best, she tried and she was a great fighter, we all loved her and thank you for being the greatest gogo,” said Zazi Mandela.

And lastly, the funeral on April 14; a Saturday morning that brought together tens of thousands of mourners at Orlando Stadium, for the day their Mother would be laid to rest.

Mama Winnie’s family bid farewell to her for the last time at her home in Orlando West, before heading to the stadium to pay their last respects with the nation. In attendance were ANC leaders, party members and leaders from across political parties. American civil rights leader Reverend Jesse Jackson and supermodel Naomi Campbell had also flown in.

It was around 9AM when Madikizela-Mandela’s coffin arrived, draped in the national flag, and carried by the South African National Defence Force.

The mourners cheered, cried, and stood up raising their fists, chanting and shouting Mama Winnie’s name. At that very moment, blood rushed through our veins.

It felt like the whole stadium was shaking but in reality, photographers were pushing and shoving to get the perfect picture, that historic picture; and it was something we most definitely captured too.

Doing our rounds around the stadium, we bumped into a 19-year-old artist, Bongani Kwabe, whose desire was to have his drawing delivered to the Madikizela-Mandela family as a gift.

“My mom met with Zindzi [Madikizela-Mandela’s daughter] and they took me to art school, they paid for my studies so this is my gift to them but I can’t give my gift to Winnie because they say it needs to be processed or something. This is just a piece of paper, my offering to her. My family now is better off because of me,” said Kwabe in gratitude.

We had never met Mama Winnie but as part of the ‘bornfree’ generation, we had read a lot about her, and now tasked to cover her funeral, it was a privilege recording history.

At 10AM, more than four speakers had taken their turn to express their thoughts and gratitude for Madikizela-Mandela’s impact on their lives.

Through the many testimonies, the whole stadium felt the late struggle veteran’s presence.

Rossi Turner, a mourner who had flown all the way from Nashville, Tennessee, in the United States, wandered the hallways of Orlando Stadium.

In 1978, he was part of the Knoxville Four, a group of students from the University of Tennessee jailed for protesting apartheid. He too came here to honor Mama Winnie.

“Well, if I’m blessed to have another child, I would name her after Winnie, she will be compelled to read all that there is about Winnie and understand that she is the Harriet Tubman of South Africa,” he said. (Tubman risked her life to lead hundreds to freedom during slavery in America.)

“Mama fought for us. She fought for us to be free in this country and now she is gone and I don’t know what to do. She was our last hope,” said Nelly Kubayi. “I am not crying, I am celebrating her life. I will miss her.”

Kubayi was one of the few who chose to dance and sing in the hallways of the stadium instead of watching the funeral procession.

Outside the stadium, there were echoes of the celebrations, amongst supporters, mourners and vendors. Some Sowetan residents set up stores selling food, clothes and merchandise. Amongst the pop-up stores, the item that sold the most was the doek, which has come to be a symbol for Mama Winnie.

At about 2PM, just as the event was coming to a close, dark clouds gathered in the sky.

Bishop Ziphozihle Siwa of the Methodist Church of Southern Africa, began delivering the final sermon. Birds started flying low in the middle of the stadium in circular motions, almost as if they could tell the rains were coming.

The Bishop’s voice got louder as the crowds started chanting. But thunder drowned them all out. The heavens were opening up; Mother Nature wanted to be a part of it too.

“May her soul rest in peace and rise in glory,” ended the Bishop with a Christian eulogy as the crowd chorused ‘Winnie Winnie’ in unison. “Rest in power,” some of them tweeted.

At exactly 2.30PM, the military readied to carry her casket out of the stadium. The heavens poured.

A man in a red beret standing in the rain raised his hands to the sky in worship. He wiped his face; it wasn’t the rain he was wiping off, but tears.

On the last leg of her mortal journey, a convoy of black cars carried Mama Winnie down the Klipspruit Valley Road of Soweto, to bury her at the Fourways Park Cemetery north of Johannesburg.

A short drive for an icon who will live long in history books around the world. 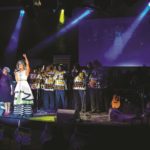 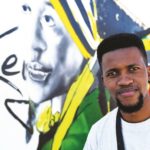 Mpho Madi in front of a Mural he painted in Soweto in Winnie Mandelas Memory. Photo by Motlabana Monnakgotla. 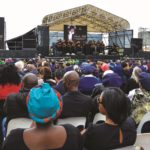 Hundreds at Constitutional Hill watch a performance by the Soweto gospel choir. Photo by Karen Mwendera. 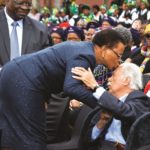 Graca Machel with George Bizo at the memorial. Photo by Karen Mwendera. 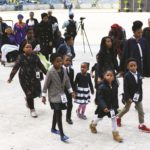 Winnie Mandela‘s grandchildren and great grandchildren after delivering their speeches at the memorial in Orlando Stadium. Photo by Motlabana Monnakgotla. 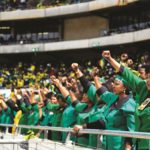 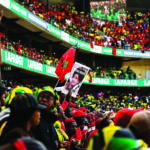 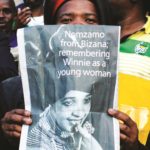 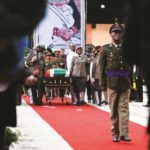 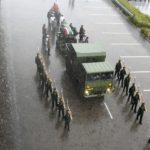 The caket being carried away in the rain to her burial site. Photo by Motlabana Monnakgotla. 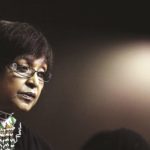 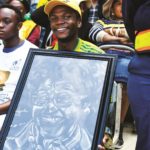 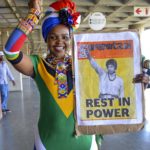 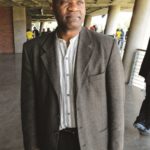 Rossi Turner, a mourner who flew in from Nashville Tennessee. Photo by Karen Mwendera.

‘Her Beauty Was The Most Striking Thing About Her’

A feisty revolutionary she may have been, but Winnie Madikizela-Mandela was always praised for her grace, beauty and sartorial style, characterized by the doek.

She had many admirers, South African President Cyril Ramaphosa one of them.

“Each time I met her, I would say ‘Mama, you are so beautiful’; and I even said what’s unfortunate is that I was too young at the time,” Ramaphosa said during his speech at Madikizela-Mandela’s funeral. He continued to say how he would have even competed with Nelson Mandela.

“Her beauty was the most striking thing about her,” she says.

According to Seuoe, Mama Winnie would moisturize her skin with rose water before applying any make-up.

Her look was characterized by light, natural make-up.

“She always loved a little bit of red on her lips and had perfects lips,” she says.

Seuoe, who has been a make-up artist for 28 years, says Madikizela-Mandela was the most beautiful woman she ever met.

Get the best of Forbes Africa sent straight to your inbox with breaking business news, insights and updates from experts across the continent.
Get this delivered to your inbox, and more info about about our products and services. By signing up for newsletters, you are agreeing to our Terms of Use and Privacy Policy.
Related Topics: #Apartheid, #funeral, #Icon, #Memorial, #Revolutionary, #South Africa, #Tribute, #Winnie, #Winnie Madikizela-Mandela.