I have not worked a day in my life, because I love what I do. The daily adrenalin rush of live television is a necessity and I thrive on the pressure. Recently, CNBC Africa went global with an exclusive interview with President Jacob Zuma. To prove my mettle as a financial journalist, I asked a number of tough questions. The more challenging aspect was that CNBC Europe had booked a satellite link the following morning, directly into their live shows. We would cross ‘live’ six times during the morning into the global CNBC network and introduce segments of the president’s interview live from Parliament in Cape Town, South Africa. 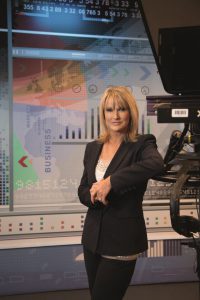 Each of the first five live crossings to London was a nerve-wracking two-minute ad lib leading into the interview. It was as though this is what I had been training for the last 13 years. Five crossings down, and congratulatory emails started streaming in from our global network affiliates, the most notable from CNBC Europe’s Head of News and Programming, Patrick Allen: “Watching from New York, very happy with the outcome, interview good, report great, you and shot look great, bravo.” But in the live television business, it is not over until it is over.

Our biggest moment was still to come – our live link directly into Squawk US. The controllers out of the US spoke to me: “Bronwyn, this is New Jersey, we are linking you into Squawk US. This is CNBC US, the biggest financial broadcaster in the world, they have a very different broadcast style, no mistakes tolerated. You must conduct a precise 45-second ad lib, then throw forward to a 15-second sound bite from President Zuma.”

My heart was pounding and my knees shaking, as

I waited for the cue from Becky Quick, the CNBC US anchor. Then it happened.

“Thank you Becky – emerging markets are out of favor and their currencies are all under pressure. South Africa has one of the most volatile currencies in the emerging market space having fallen some 17% against the dollar over 2013. Many economists in South Africa feel ongoing allegations of corruption against the ruling party and unrest in the mining sector are fueling further rand weakness. In a CNBC Africa exclusive, I sat down with South Africa’s President Jacob Zuma and asked him what he thought was behind the rand’s fall.”

And just as suddenly as it began, it was over. South Africa’s minute of fame on the world’s biggest financial network had come and gone. How did it go? The broad smile on my producer’s face and her thumbs-up indicated it was a clean execution. My reputation intact, I was ready to face another day in the world of live broadcasting.