Kopano, dress me up but I don’t want to look like $1 million.’

This is an instruction that 27-year-old Kopano Motsoeneng is very familiar with. ‘While the wheels of fashion are moving at the speed of light, many women still value the safety of classic, timeless style. These are the women Motsoeneng caters for. He is a stylist whose passion for making women look good has motivated him to embark on a career where he has the pleasure of telling high-earning women what to wear.

Motsoeneng’s introduction to the fashion world came at the tender age of 11. He recalls advising girls in his school on their Matric farewell dresses.

He also devoured the contents of any fashion magazine he could get his hands on, until he finished high school, and registered at a fashion school in Johannesburg, South Africa. Here Motsoeneng learned that being a fashion student did not necessarily mean that all you could become was a designer. He was hopeless at making patterns, but he was a skilled salesperson. 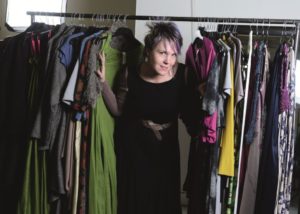 He joined small boutiques, which allowed him to interact with cust-omers and introduce them to different designers’ brands. Motsoeneng identified a unique opportunity to pair designers with potential clients.

In 2012, he launched Strictly KP. His main order of business was hosting intimate fashion events where a number of local designers and potential clients gathered in a small venue set up like a boutique store. Designers showcased their garments and clients nibbled on snacks and sipped champagne as they shopped.

With each gathering, Motsoeneng cemented his relationship with the circle of designers. They began to trust him to sell their clothes, while maintaining respect for their labels. His network to diversify, as clients began seeking out Motsoeneng’s fashion advice talent on a more personal level.

One day he received an unusual request: ‘I’m going on a trip, do you mind packing for me?’

“All I thought was, ‘you only see this on reality television!,” Motsoeneng laughs.

It was his first personal styling job. The client was going to Europe and needed him to pack her luggage “strategically”. He was paid $37 just to pack lightly enough to allow the woman space for shopping spree purchases. She must have been happy with his decisions; she still calls on him regularly.

With each consultation, Motsoe-neng aims to help a woman identify her signature style and feel confident about the choice. His typical clients are self-assured corporate leaders, who need him to diffuse the black, grey and navy items in their wardrobes with some vibrant colors that can they can wear to social events.

Over time, however, Motsoeneng has learnt that not all corporate women wear black, grey and navy suits. Twenty-nine-year-old head of operations at Liberty Intelligence Insurance, Lerato Olahleng, expresses her quirky personality within the confines of her ‘boring’ office dress code.

When she first met Motsoeneng, he helped her pick out an outfit at the store where he worked. He studied her style and would keep her informed about any new stock that she might be interested in before it hit the shelves.

“He’s helped to get rid of that feeling you get when you look into your wardrobe and think you have nothing to wear,” she says.

For Olahleng, money is no object when it comes to Motsoeneng’s services. She says she loves being able to sleep in on a Saturday morning and spend much-needed quality time with family and friends, instead of being at the mercy of busy, overwhelming malls, trying to find something to wear.

Motsoeneng introduced Olahleng to the brain child of 29-year-old designer Isabelle Lötter, Sies Isabelle! The label is aimed at larger women, who enjoy looking both feminine and fashionable.

And when Olahleng saw an ele-gantly draped tweed coat-dress by Sies Isabelle!, she couldn’t resist. Lötter says the coat-dress is a top seller because it is a flattering cut.

“My target market is a curvy figure like myself. I basically design for me… there’s a big gap in the market for curvaceous women who have style but can only shop at stores like Donna Claire,” explains Lötter.

Her range is so wide that both her 75-year-old grandmother and a 14-year-old cousin can wear her designs. Lötter particularly appeals to professionals like Olahleng, because her clothes are expressive and not rigidly corporate; they can easily be dressed up or down.

The fashion business is a tough one. Countries like China are mass producing their goods much faster than the local industry.

“South Africa’s textile industry is almost non-existent at this point… a lot of my fabrics are imported,” Lötter admits.

She says South African designers are no competition for China, mainly because local consumers are not discerning enough. 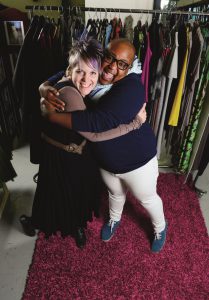 Despite what you may think, Motsoeneng does not only style women. He consults with one couple on a weekly basis, planning both their wardrobes for the week ahead. At first he was advising only the woman, but one day she asked him to style her husband, a prominent businessman who travels frequently. When he received a message saying, ‘Thank you so much for picking this outfit for him, he went on his trip with a spring in his step’, Motsoeneng realized how much a good outfit can do for men as well.

That aside, most of his clients are women. One of the biggest lessons he has learnt is that even high-powered businesswomen have insecurities.

“As much as women say they don’t care what people say, they really do, because they are often judged by what they look like,” he explains.

One of Motsoeneng’s more unusual clients is neither a businesswoman nor a corporate player. Karusha Pillay is a nursery school teacher who, in her own words, “doesn’t get dolled up for work” in case she ruins her clothes. Outside work, however, she embraces her femininity and wants to look glamorous.

Pillay does not earn a lot of money, but says she finds Motsoeneng’s services invaluable, because he sources pieces that are tailored for her body shape and which last season after season. Pillay says she was won over by Motsoeneng’s personal approach.

“Styling is very personal because I come into your personal space, but I always try to establish trust with my clients on first consultation,” says Motsoeneng.

Another of his secret weapons is using young, talented South African designers who have the potential to compete with international labels like Zara, but cannot afford the rent. Sourcing from less recognized brands gives his clients a sense of exclusivity, which is often lost when trawling the retail chains in a shopping mall.

And despite all the challenges that the South African textile industry presents, Motsoeneng believes that “you are not taking a step back; you’re simply doing the cha-cha”.