The South African fashion designer is enamored by the haunting beauty of the capital of the Czech Republic.

One of South Africa’s top fashion designers and entrepreneurs, JJ Schoeman, whose eponymous brand has kept him in circulation for decades amongst the country’s swish set, may hail from Highveld, Centurion, but his favorite place in the world is the Czech Republic.

When not styling Johannesburg’s fashionable elite, he holidays abroad, particularly in Europe.

His last trip was to Prague, over the Christmas and New Year vacations. It’s his favorite city, where he loves taking strolls on the countless bridges crossing the Vltava River.

This city’s baroque buildings, Gothic churches and the landmark medieval astronomical clock have never ceased to amaze him.

“The city gives one the chills as one gets a haunting feeling just strolling around. The buildings and towers have a characteristic Gothic look and feel. The feeling I got when strolling over the many bridges over the river Vltava, was [as though] a vampire would possibly appear, somewhere, somehow…,” says Schoeman.

“We flew economy class and did the whole of Europe by first-class train. The plan was just economical. If you are going to do a big holiday with lots of things, then you better make sure you have enough money. Imagine flying for R100,000 ($7,000); then there’s a whole budget that’s gone, so it’s better fly for R10,000 ($700), because you have so many things to do.”

The other European cities he visited included Berlin, Paris, Vienna and Amsterdam.

He has gone up the Eiffel Tower and enjoyed the orchestras and operas in Vienna.

Prague impressed Schoeman the most and he booked himself into the best accommodation the city could offer, also visiting cathedrals, palaces and museums. He shopped too. Schoeman loves crystal and Prague specializes in it.

Besides that, the clothing stores are ubiquitous and the pricing very affordable, says the designer.

“Usually when I travel, I travel as light as possible as I like to shop for all sorts of things that are beautiful and sometimes wearable. I often buy luggage to return with my shopping, as I run out of space in my hand luggage. Only the clothes I wear on the flight go with me and I buy everything else that I need there, even toothpaste.” 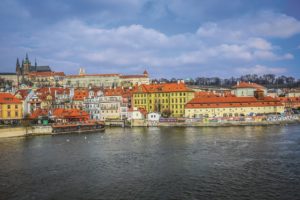 The Vltava river and the historical center of Prague. Photo: Getty Images 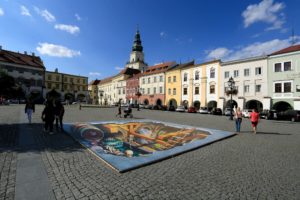 A picture taken on July 13, 2018 shows a 3D street painting on the main square in the Czech city of Kromeriz with the castle in the background. Photo: Getty Image

“It’s just simpler to spend within your budget and in their currency, as one has already decided how much that is,” he says.

However, Schoeman does not convert foreign currency to South African rands; he simply does not see the point.

On the plane, he catches up on all the movies he has missed during the year.

“Simply, as there is often not much time for cinema,” he says.

“On a long-haul flight, I do like to take a nap after watching a few films. Often, I have engaged in light conversation with fellow passengers, but it really depends if one makes the connection.”

When not making clothes for brides, businesswomen and celebrities, Schoeman is traveling and the Czech Republic will always be top of the list for the fashionista from Centurion.

Get the best of Forbes Africa sent straight to your inbox with breaking business news, insights and updates from experts across the continent.
Get this delivered to your inbox, and more info about about our products and services. By signing up for newsletters, you are agreeing to our Terms of Use and Privacy Policy.
Related Topics: #Europe, #Executive Travel, #JJ Schoeman, #Prague, #Travelling.