In Luanda, Angola’s capital, a group of teenage girls sit together, chatting and giggling. They are excited to share in the parties marking 40 years since their country’s independence. One member is especially jubilant, celebrating a double victory. Earlier that year, Catarina Serra joined a team in Portugal for Angola’s first ever international showjumping tournament, bringing back a silver medal and a heightened sense of national pride.

“Portugal was the highlight… showjumping fascinates me and I always intended to pursue it as a career,” says the 18-year-old Serra, exhibiting a determination belying her age.

Showjumping is an Olympic sport, judged according to a rider’s ability to clear obstacles in the shortest time possible. While participants are not judged for style, it is widely seen as one of the most stylish sports in the world, attracting luxury brand sponsors and a jet-set elite from across the globe. While the sport may appeal to those seeking glamour and excitement, in practice it requires dedication, strength, stamina, balance, as well as empathy with and control of the horse.

Angolan riders must train regularly, face internal competitions at least once a month and are encouraged to take part in at least three regional competitions each year. While her friends enjoy leisurely weekends at the beach or the mall, Serra starts her weekends at 7.30AM, taking the traffic-logged journey to the riding school. Here she tacks up her horse, begins training, showers her down, and then starts all over with another mare.

“It is hard to balance riding, school, family, friends…” she huffs as she runs from one stable to another.

Showjumping began in France and Britain in the 18th century but is very new to Angola, where riding itself can only be traced back to the 1950s. It was then that horses were used for combat purposes by the Portuguese colonial forces against guerrillas in the Angolan War of Independence. These cavalry units, known as the Dragöes de Angola, benefited from a better view of the battlefield above the tall grass. They also held a psychological advantage over their enemy who were unaccustomed to dealing with soldiers on horseback. Since independence, Angola’s cavalry forces were expanded and the mounted unit remains an integral and highly-regarded part of the national police force. Horses were first imported from South Africa, and later from Argentina. The former Minister of Petroleum, Desidério Costa, boosted the equestrian movement further by importing the first Lusitano breed from Portugal and setting up the first riding school after independence. 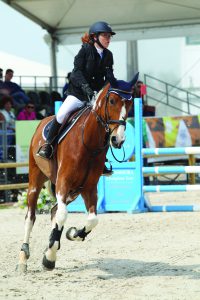 This school, Gimunalu, on the outskirts of Luanda, remains one of the top training grounds for athletes today, featuring a stadium and a riding school with a covered ring and jumping arena. It also houses a 42-box stable yard, accommodation for the riders, and several fields. In addition, a specialist hippotherapy center provides rehabilitation for people affected by motor, sensory and mental disorders through interdisciplinary training with the horses. Meanwhile, the Huila riding center at Lubango, born out of the dust in 2013, now boasts a three-hectare field, five paddocks, a 34-stable yard, three training rings, as well as accommodation and event rooms.

A mostly rural country, with many farms and a predominantly young population, Angola is now seizing the opportunity to become a major player worldwide. In 2009, it set up its own national federation for equestrian sports, Fequangola. In 2014, it was accepted into the Fédération Equestre Internationale (FEI), the top governing body for equestrian competitions, and in 2015 it sent a team to compete in Portugal at a Grand Prix tour, the highest level of showjumping competition. In the same year, in line with the leading governing body which oversees the breeding of competitive dressage and showjumping horses, it also began its first insemination program for a local line of specialist horses.

It’s an expensive business. Contrast this with Angola’s extreme poverty and one would be forgiven for thinking that its foray into equestrian sports comes at a shameful expense. However, unlike many countries where the sport is traditionally reserved for the affluent, Angola is keen to utilize the sport as a lifeline for the disadvantaged. The mounted police unit gives free riding lessons to children of all staff, while Gimunalu also offers free lessons to stable grooms, relatives of farmers, as well as top students from the neighboring school. FEI Solidarity, a global program to support the next generation of riders, is also being implemented in Angola.

“[Showjumping] is a means to give some hope to children of a poorer background and have them practice this wonderful sport. I just love to see the smiles on their faces when they sit on horseback for the very first time,” says Fequangola Vice President for Foreign Affairs, Ginga d’Almeida.

Considering the slump in oil prices and its need to diversify the economy, Angola’s focus on equestrian sports is also pragmatic. Equestrian sport is just one of several areas targeted for creating jobs and boosting economic growth. The nation aims to attract foreign direct investment through the sale of its showjumping bloodstock to neighboring countries, as well as to boost tourism through top-class riding schools and international competitions.

Unsurprisingly, showjumping is being taken very seriously at the upper echelons of government, with President Jose Eduardo dos Santos attending the first competition held in the country in 2009. Other African nations are providing ample competition, with the FEI now boasting 14 members across the continent. Angola will be focusing on jumping in particular over the coming years, working closely with the FEI, neighboring national federations and the African Confederation of Equestrian Sports.

“I personally intend to pursue efforts… for Angola to become the most equestrian nation in southwest Africa,” says d’Almeida with a determined smile.

Sadly, the fall in oil prices and global economic recession has forced the country to tighten its belt, and the lack of funds is proving a higher obstacle than the jumps themselves. If Angola is to maintain momentum in the world of showjumping, it will need private sponsorship. Top-notch trainers, qualified veterinary surgeons and horse medicine are not readily found within the country and come at a huge cost. Add to this the maintenance of the riding schools, entry fees into international competitions, along with the logistics of getting the team there in the first place, and the costs spiral. For this reason Angola will not be competing at this year’s Olympics in Brazil.

“Unfortunately riding is an expensive sport so we need to find sponsors so we can better finance our activities. I trust that, with time, people will understand this sport better and support us more,” says d’Almeida.

While Angola faces many challenges, it holds a promising future. Serra has her eye on a particular prize.

“I would be very pleased if one day I could get to the World Equestrian Games and maybe, who knows, the Olympics,” she says.

FEI Secretary General Sabrina Ibáñez says that this is not such a distant dream.

“This is a real possibility for Angola looking towards Tokyo 2020 and beyond,” she says.

All the more reason for a double celebration at the country’s 50th independence anniversary.