The private railway station at Capital Park in Pretoria suddenly turns into a scene from a colonial movie, complete with sound effects.

A locomotive noisily chugs into view on the platform, returning from a three-day journey to Cape Town. Liveried staff formally line up to welcome the arriving guests.

A hiss and a screech and the locomotive, complete with suites, lounges and dining cars, grinds to a halt. The Rovos Rail train has arrived.

A mobile stairway is set up for guests whilst staff collect luggage. Vos waits to greet the alighting passengers.

Receiving guests has been a tradition for Vos for 29 years, ever since he started Rovos Rail.

“It started off as a hobby I suppose and at the end of the day, I can only be happy pursuing my hobby as an occupation,” Vos tells FORBES AFRICA of his successful – and growing – railway business.

An hour before the train’s arrival, we meet Vos in the luxury carriage of another one of his locomotives with red and green velvet upholstery, and featuring classical furniture and glossy wood panels.

Rohan Vos greets his guests everytime they step off the train. Photo by Motlabana Monnakgotla.

“Seventy five percent of our passengers come as a result of our efforts in getting them to South Africa. And that’s a very pleasing thought,” he says, proud of being able to contribute to South Africa’s tourism sector.

“Initially, we were living off tourists already in the country. But after five to seven years of operation, we were creating tourists [for] the country.”

A cross between a luxury hotel and a train tourism service, Vos says it took him a while to get it rolling.

It all started with Vos wanting to save the steam engine locomotives from being phased out and replaced by modern diesel trains. It was a challenge he was willing to take up.

Having been involved in the automotive industry, Vos and his friend at the time would collect old spare parts of trains and refurbish them.

He soon wanted his own locomotives.

He then decided to service the trains and sell tickets for each journey in order for it to become a lucrative business.

But one thing hindered the then 40-something Vos at the time. He had no experience in the railway and locomotive industry, nor in the tourism industry.

Yet, he attempted to sell both the experience of a train journey and inland tours.

He says it took the business five years to break even. 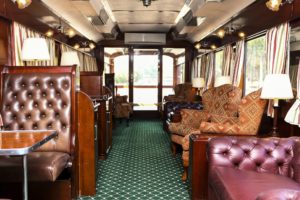 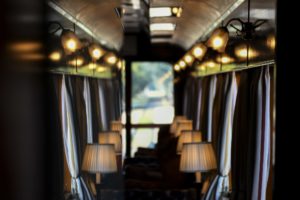 “I was petrified for at least three of the five years. The first two years were fun, settling down and getting to understand the product. But when we were chucking money every day, it becomes a bit boring especially when you run out of it,” Vos says.

It was a complete nightmare for Vos and his family. Luckily, his wife, Anthea, stood by him and raised their four children whilst he tried to keep the business afloat.

In gratitude, Vos decided to name the different locomotives of Rovos Rail after each of his children – Brenda, Bianca, Tiffany and Shaun.

“By then, I had sold my house, my cars and boats and planes…I had sold everything I could possibly sell to rake in cash,” he says.

Despite the losses and lack of sleep, Vos endured. He was determined to make it work.

“I had been my own boss since the age of 20, so to suddenly face the idea of failure was just not acceptable,” Vos said.

It was this tenacity that helped despite the naysayers around him. He didn’t care for them.

“I didn’t think we could compete at all but I was quite happy with that thought because I thought our product is so different to everybody else’s and that we have a niche and we must just polish that niche,” Vos says.

In 1996, the business began to pick up slowly and thereafter, started to attract more customers through word-of-mouth.

Today, Rovos Rail employs 415 staff, up from the 70 he started with. The company now runs six trains at a time; something Vos is proud of.

Next year, Vos and his team celebrate Rovos’ 30th anniversary.

“If you had asked me then did I think if we would be where we are today, I would have laughed, I would have not thought it was possible,” he says now.

Vos is the type of leader who involves himself in every aspect of the business, be it doubling up as an accountant, or even playing electrician and tour guide. His staff attest to it.

With Vos busy in preparations for the train to arrive, Rovos Rail’s sales manager Ian Morrison had taken us for a tour around the facility and the yard.

The teams keep the rolling stock in order, spray-painting the trains’ royal green exteriors, sawing wood for the interiors and also packing food parcels for the next trip.

Everything for the train is created or recycled at the Rovos workshop.

“Vos has been incredible in [creating] luxury in such a small space,” says Morrison, who has been with the company for the last five years.

“Rovos Rail is a first world business in a third world country.”

Gert Van Vuuren at the Rovos museum says steam locomotives have been his passion all his life. Photo by Motlabana Monnakgotla.

Morrison takes us to a museum where one of Rovos Rail’s first drivers is now turning his love for locomotives into a hobby. The museum has inside it miniature trains, tracks and stations, evoking the romance and nostalgia of a bygone era.

In 1998, Gert Van Vuuren started his journey as the driver of a steam train.

“My whole life, I have enjoyed steam locomotives. It’s my passion,” he tells us.

Five years ago, he became a pensioner.

“Mr Vos asked me to come back and build this museum for him from scratch, so now I’m back on track,” he says smiling.

A miniature version of the Rovos Rail built by Gert Van Vurren. Photo by Motlabana Monnakgotla.

Vuuren is one of the many who has seen the business grow to where it is today. In his office are old photos of him, in the driver’s seat of a steam train. He holds these memories very close.

As for Vos, at the age of 72, he still has enough energy to keep the business going. He plans to expand the routes into Kenya, Nigeria and Malawi.

“Wherever there’s a railway line, I am now attracted and I think [the] railways are beginning to gain traction again in Africa,” says Vos, signing off.

His train chugs out of the station, whistling and fading away into the horizon and the sunset to yet another dreamy journey and destination.

Get the best of Forbes Africa sent straight to your inbox with breaking business news, insights and updates from experts across the continent.
Get this delivered to your inbox, and more info about about our products and services. By signing up for newsletters, you are agreeing to our Terms of Use and Privacy Policy.
Related Topics: #Featured, #Luxury, #Nostalgia, #railway, #Rovos Rail Pretoria, #Train, #Train Service, #Video.