She is a talk show host, TV producer, media personality and entrepreneur. With the success of her talk show Moments with Mo, Mosunmola ‘Mo’ Abudu is often described as Africa’s own ‘Queen of Talk’.

At a glamorous launch of her Ebony Life TV channel in Lagos, Nigeria, in July, Forbes recognized Abudu as the first woman on the continent to own a pan-African TV channel. With Ebony Life, Abudu hopes to change perceptions of Africa, by showcasing the diversity of the continent and celebrating Africans who are making their mark.

“We believe it’s time to present a different Africa, one never seen before,” she explains.

Abudu was born in London to Nigerian parents. She worked for several corporate giants, including Exxon Mobil, before establishing a human resources consultancy, Vic Lawrence and Associates.

With her passion for media, however, it wasn’t long before she launched on her own television program. Abudu lives by the mantra, ‘If you think it, you can do it’. Her program, is the first daily talk show in Africa to be syndicated across the continent. It focuses on a variety of topics from lifestyle and healthcare to politics and culture.

To date, Abudu has hosted many high-profile people and dignitaries, including former US secretary of state Hillary Clinton and former Nigerian president Olusegun Obasanjo.

“I remember Hillary Clinton saying to me, ‘People like you have to make a difference by creating a different reality of Africa’. Growing up as an African child in the UK, I remember vividly how I always had to defend who I was as an African. Even in later years… asking people about their perception of Africa, I was shocked at the word associations used to describe our continent, ‘famine, safari, Oxfam and HIV’.”

Abudu says Ebony TV was just an idea but the start-up sum of $15 million seemed insurmountable. However, she did not let her fears deter her. 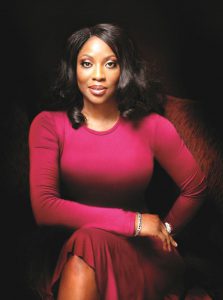 “The sheer reality is that there are millions of people who have done great things and started out with nothing except the idea. Don’t be afraid to share your ideas, passion, and ideals. And don’t think that anyone is too different or too insignificant to help,” she advises.

It took Abudu four years of planning, presentations and looking for investors to get Ebony TV off the ground. “This was my idea, my passion and I was determined to succeed.”

The media mogul describes Africa as a “brand of opportunities, where you have the freedom to create whatever you want, because you will always find talent and people willing to help you”.

“On a continent growing fast in terms of GDP and a massive middle class, particularly in Nigeria, challenges must be looked at as opportunities. I couldn’t have achieved this anywhere else,” she says.

She hopes her achievements will inspire other women entrepreneurs.

“Women have dreams, but we tend to hold ourselves back and are our own worst enemy at times. We place ourselves last and put our dreams on hold out of fear and the belief that we can’t do it. We also tend to put other women down; it’s unfortunately a global thing. We need to learn to support each other and celebrate our success.”

She may be a high-flyer in the media industry but Abudu is first and foremost a woman. She believes women have a responsibility to maintain balance in their lives.

“I work extremely hard daily but I believe in looking good and nice. I make sure that I find the time to focus on myself, to feel confident and articulate in business,” she says firmly.

Abudu lights up when she mentions her children.

“Without them, I have nothing. Balancing my role as a working mother is not easy, but they are good children, which has allowed me to progress as far as I have.”

After losing her father when she was a young, Abudu says her mother plays an important role in her life.

“My source of inspiration is my mother; she is indeed my biggest motivator and gives me strength. When I don’t believe in myself, she believes in me.”

Abudu is determined to make a difference in people’s lives, especially young people.

“Even though the [Ebony Life] brand is still young, we will have extensions, including apps, perhaps even accessories and African fashion, which will hopefully leave an impact, particularly on the youth in Africa.”

And with her focus and passion, it is easy to believe her when she says, “everything you think you know about Africa is about to change, forever!”.