June fries itself to an end; London is sticky with the combustible residue of unseasonable heat, lager, and irrational, tabloid-whipped World Cup optimism. It’s too absurd to be an African summer; temperatures above 30 degrees are tearfully embraced, red-raw and half-naked, by the English, with a stunned but gleeful alacrity at the entrance of a jolly, party-starting relative believed long-dead.

A hundred and fourteen years earlier, the Sierra Leonean writer A.B.C. Merriman-Labor, astonished to discover the religious void in the heart of the greatest metropolis on earth, sends a letter home from London in which he decides, with horror and affection, that “the Britons are barbarians and heathens”.

This motif of seeing – by Africans of the British and of British Africans of themselves – is one of the more urgent themes of 2018’s Africa Writes event, the Royal African Society’s annual literature festival. Merriman-Labor’s biographer for An African in Imperial London, Danell Jones, is discussing ‘African Literary Figures in Georgian & Edwardian London’ at the British Library with Ade Solanke, author of the play Phillis in London (about the visit to London in 1773 of the “prodigy, poet, celebrity and slave” Phillis Wheatley), and the writer S.I. Martin, who “works with museums, archives and the education sector to bring diverse histories to wider audiences”.

It’s a crackling and challenging panel, with evocative and haunting subjects as its focus. “Forgotten voices have important things to teach us,” says Jones, echoing Solanke’s entreaty for writers to “exhume these stories” and Martin’s to “not enshrine, but internalize”.

Now no longer forgotten, these are ardent tales, tragic and cautionary. Merriman-Labor’s dazzling deconstruction of the contradictions of Edwardian London – its wretched penury cowering at the feet of its titanic opulence – was published in 1909, for which he achieved a degree of literary eminence, but he was to die in poverty at the age of 41, in a state-run hospital for the poor, his legal and artistic careers eviscerated by racism.

“Forgotten voices have important things to teach us,” – Danell Jones

Wheatley’s patron in Boston – her ‘owner’ (Wheatley had been abducted in Senegambia at the age of seven) – orchestrates the publication of her poetry in London, and she is “plunged into English high society”, but Wheatley dies shortly after her emancipation, at just 31, too poor to publish the second volume of poems that may have saved her. Both Merriman-Labor and Wheatley have vexing facets to their personalities. Is the former an arriviste, as starry-eyed as any narcissistic creative, with fame and adoration beckoning on the horizon of his mind’s eye? Is the latter a malleable apologist, in her poetry, for cultural and religious imperialism? These human beings are complicated; they are impressive. But they are not always likeable.

Which begs the question: how does a writer ‘exhume these stories’ with both compassion and honesty? How can these voices be reanimated, without committing further violations upon their memory, since we can never know how they ever really felt? Even if, as Solanke quotes from William Faulkner, “the past is never dead – it’s not even past”?

“You know, I’m against that whole redemptive arc of black literature,” says Martin. “Yes, there has to be redemption, but that comes from the reader, through self-examination, rather than the character.”

Solanke agrees. “I don’t want simple people,” she says. “Phillis is problematic. I came close several times to abandoning her story. She wasn’t the Phillis I expected. But it’s actually been transformative for me as a writer. It’s the drama of facts – and then the drama of imagination.”

In An African in Imperial London, Jones places Merriman-Labor at a political march in London which he may or may not have attended – she has no supporting evidence either way, but argues that the artist is at liberty to fabricate experiences if they support a rational truth. “I can’t prove that he was there,” she says. “But to me, it made sense in the larger story.” 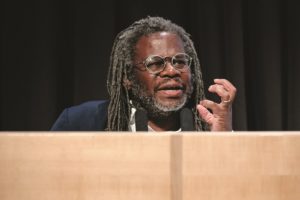 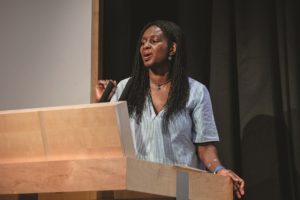 Merriman-Labor is mesmerized by London’s transport technology – “Overhead and Underfoot, Overground and Underground, Terrestrial and Celestial” – which shuttles me across the city for a second Africa Writes event at Rich Mix in East London. What would Merriman-Labor – or Wheatley – have made of the phone-scrolling throngs queuing for a salt-beef bagel on nearby Brick Lane, or the homeless man outside the restaurant gifting his incredulous dog a polystyrene tray overflowing with chips and ketchup? This is the gristle of the city, the marrow of poetry.

Rachel Long, Theresa Lola and Hibaq Osman, three members of Octavia, “a poetry collective for women of color founded in response to the lack of inclusivity and representation in literature and academia,” are sparing a few minutes to chat before rushing back to rehearsals for the evening’s show. It’s a credit to the Africa Writes programming that the events pull the festival’s central threads long and taught through centuries, across genres. And it’s striking that this collective of young female artists eschews the use of social media to promote its shows. Long, Octavia’s founder member, calls these platforms “unsafe spaces for women of color,” after a successful past event attracted a batch of abusive comments on its Facebook page.

“For me it was just like, how dare you?” she says. “How could you dampen something that was that beautiful?” The event later that evening is indeed exquisite and irresistible, both in execution and atmosphere – the boundaries of performance poetry are stretched and explored across several sets of poems which are by turns funny, tragic and uplifting.

“I feel like because so much of what we do is almost in secret,” says Osman, “that when we’re on stage, it becomes more intimate than other things I’ve been a part of. Everyone’s a bit more likely to take in the words in a way that maybe they weren’t expecting.”

It’s a night about woke female power, and the vibranium-hard Afrofuturism of the black creative economy – a widening path to artistic and financial success that was so cruelly curtailed for trailblazers like Wheatley and Merriman-Labor. Where do these black British artists see themselves in this burgeoning new aesthetic?

“What I think is so beautiful about Afrofuturism is this merging of different cultures,” says Lola. “I feel like before there used to be isolated identities. Afrofuturism will be this space where everything is embraced.”

‘An African in Imperial London’ is out now and published by Hurst Publishers. Ade Solanke’s new play ‘The Court Must Have a Queen’ runs through to September 2 at Hampton Court Palace in the UK.

Get the best of Forbes Africa sent straight to your inbox with breaking business news, insights and updates from experts across the continent.
Get this delivered to your inbox, and more info about about our products and services. By signing up for newsletters, you are agreeing to our Terms of Use and Privacy Policy.
Related Topics: #African Literature, #Art, #Featured, #Literature Festival, #London, #Writing.